Poet, songwriter, author, workshop facilitator, and educator Regie Gibson has performed, taught, and lectured at schools, universities, theaters and various other venues on two continents and in seven countries including Havana Cuba. Harlym 1two5 remains very well known in the New York City area in slam poetry circles. Known as Harlym 125, He was a frequent and highly regarded figure in competitions in New York and beyond. 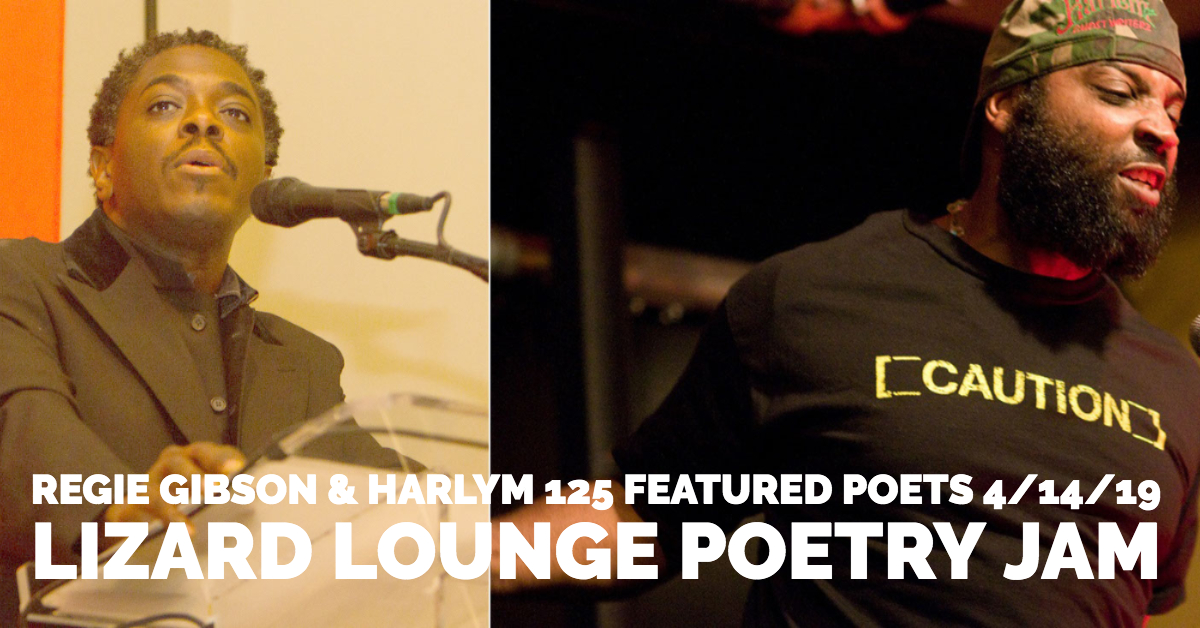 Poet, songwriter, author, workshop facilitator, and educator Regie Gibson has performed, taught, and lectured at schools, universities, theaters and various other venues on two continents and in seven countries including Havana Cuba. Regie and his work appear in the New Line Cinema film love jones, based largely on events in his life. The poem entitled “Brother to the Night (A Blues for Nina)” appears on the movie soundtrack and is performed by the film’s star, Larenz Tate. Regie performed “Hey Nappyhead” in the film with world-renowned percussionist and composer Kahil El Zabar, composer of the score for The Lion King musical.

Regie is a former National Poetry Slam Individual Champion, was selected one of Chicago Tribune’s Artist of the Year for Excellence for his poetry. He has co-judge the Chicago Sun-Times Poetry Competition with Marc Smith and Mark Strand, has been regularly featured on N. P. R. and has appeared on HBO’s Def Poetry Jam.

Regie has toured with the Chicago Mask Ensemble, performing dramatic and poetic adaptations of common myths from around the world. He co-produced the play “The Mystery of Fire Bread” while performing in Europe with the Sharnier Theater in the cities of Hanover, Frankfurt, Berlin, and the Literature Haus in Hamburg, Germany. His original works of poetry have been dramatized and scored by classical flautist and Professor Janet Misurell-Mitchell and produced and directed by Eric Rosen for the Steppenwolf Theater’s Words on Fire production. In 1999 Regie performed for the award-winning Traffic Series at Chicago’s Steppenwolf Theater where he adapted the work of Kurt Vonnegut. Regie founded the LiteraryMusic Ensemble Neon JuJu: a literary and musical arts ensemble utilizing classic, contemporary and original literary text combined with Middle Eastern, Contemporary American and European classic music.

Regie is widely published in anthologies, magazines and journals such as The Iowa Review, Harvard Divinity Magazine, Poetry Magazine, Spoken Word Revolution (Source Books), The Good Men Project and several others. His full-length book of poetry Storms Beneath The Skin (EM Press) was published in 2001 and received the Golden Pen Award. In 2005 Regie was a featured on the PBS Arts magazine- Art Close-Up and was subsequently nominated for a Boston Grammy. In Spring of 2008 Regie competed in and won the “Big Boat” international poetry competition held in Monfalcone, Italy. Regie has received his MFA in Poetry from New England College, and continues to facilitate creative writing workshops, performances, and otherwise augmenting literary curricula for high schools and colleges across the United States.

Harlym 1two5 remains very well known in the New York City area in slam poetry circles. Known as Harlym 125, He was a frequent and highly regarded figure in competitions in New York and beyond. 125 has become a part of the Boston area poetry scene and joined a team of poets who have won numerous competitions regionally and nationally. 125 has also become well known in the Boston area for his work leading workshops dealing with issues of diversity. Several times in the last couple of years, Harlym has been called to local high schools, colleges and communities to help bring a calm and constructive unity after racial incidents have happened. Known for his work, Harlym 1Two5 is often asked to be a panelist or to give presentations on a broad range of topics regarding diversity and pluralism, and also is asked to prepare presentations in response to very specific incidents or conditions. Appearing at dozens of college campuses every year. He is the “HUMAN HIGHLIGHT OF POETRY AND EDU-ACTIVISM.”