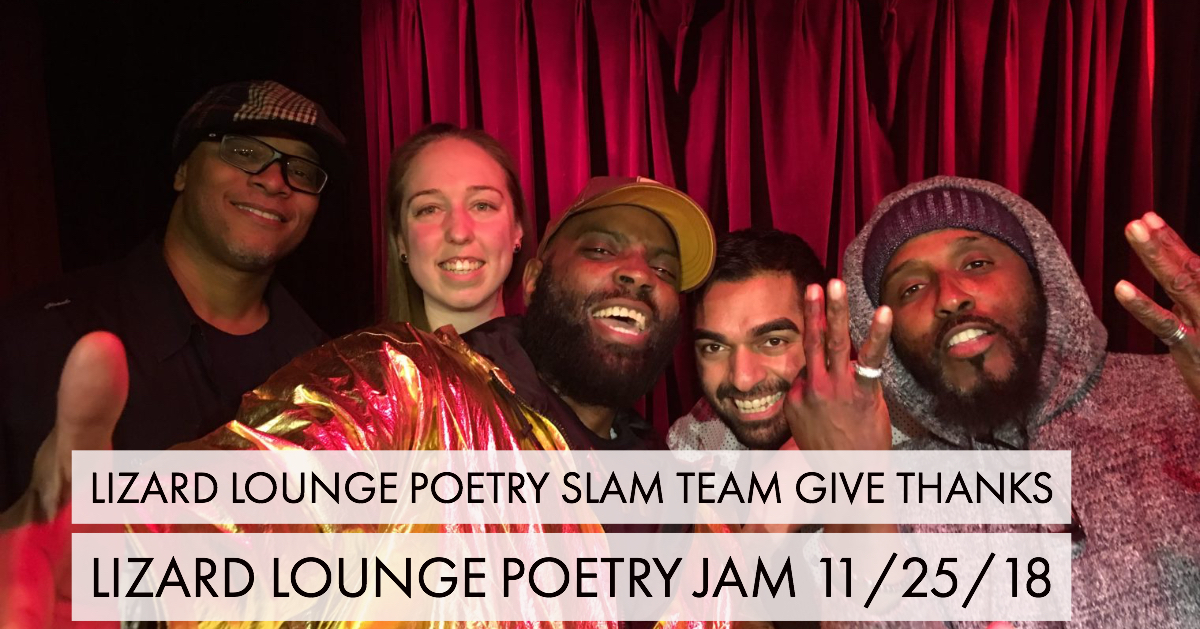 Art Collins is a Boston poet who believes that there is extraordinary power in words and considers his poetry to be socially conscious as well as entertaining. He hopes that his brand of poetry will motivate action, provoke thought, and stimulate the mind of the listener. Artis Co-host of the Lizard Lounge Poetry Slam venue and was a member of 2008, 2010,2016 & 2017 Lizard Lounge National Poetry Slam Team. He is an educator in the Boston Public School system and continues to perform his unique style of poetry with the
aspirations of reaching a global audience.

Lexi Wight is a transplant from Maine who just recently found her place in the city of Boston through slam poetry. She also spends her free time as the Artistic Director of a up and coming theater company called Catalyst Stage, through which she starred in Santaland Diaries during the holiday season. On a weekly basis, you can find her loitering at the Terry O’Reilly’s open mic jam in Newton, as well as the one and only Lizard Lounge’s poetry slam. She also has been a guest on 87FM’s Smokin’ Rhymes and the Boston Stoops podcast. Still a growing poet – she is thrilled to have her first feature spot be at the Lizard Lounge.

Harlym 1two5 remains very well known in the New York City area in slam poetry circles. Known as Harlym 125, He was a frequent and highly regarded figure in competitions in New York and beyond. 125 has become a part of the Boston area poetry scene and joined a team of poets who have won numerous competitions regionally and nationally. 125 has also become well known in the Boston area for his work leading workshops dealing with issues of diversity. Several times in the last couple of years, Harlym has been called to local high schools, colleges and communities to help bring a calm and constructive unity after racial incidents have happened. Known for his work, Harlym 1Two5 is often asked to be a panelist or to give presentations on a broad range of topics regarding diversity and pluralism, and also is asked to prepare presentations in response to very specific incidents or conditions. Appearing at dozens of college campuses every year. He is the “HUMAN HIGHLIGHT OF POETRY AND EDU-ACTIVISM.”

Usman Hameedi is a Pakistani-American scientist and poet. Over the course of ten years, Usman has contributed to academic and industry laboratories with an array of research focuses, including protein crystallography, mitochondrial dynamics, cancer cell metabolism, and drug discovery. During that time, he has competed in and coached for collegiate and national level poetry slams. He has been featured on Upworthy, Huffington Post, and the Story Collider: Storytelling for Scientists podcast. His is a member of the 2018 Lizard Lounge Poetry Slam team and is the 2018 Lizard King and World Champion. His north star is to improve the quality of and access to health care for disadvantaged communities. Beyond his professional interests, Usman is an avid gym rat, and his ideal day off would include powerlifting to the music of iron hitting the floor.

The Warrior Michael Bonds is a multi-talented nationally recognized and internationally respected Spokenword Artist, author and motivator from right here in Boston. Straight out of Roxbury to be exact, Michael Bonds has grown to become an affective Motivational Speaker, a Mentor and a Youth Worker for some of Boston’s highest risk criminally active young men and gang affiliates. He has lent his poetic gift to causes related to human rights and justice and equality for years locally and around the country. Using his unique style of “in your face street powered Inthugligent poetry” he has performed at events and venues and several Ivy League colleges and universities here and abroad. He self-published not one but two books of his own works. “Gunz Poems & Rosez” published in 2005, is his very first manuscript. Most of the content of this book consists of some writings he compiled while in prison for 10 years. His second book “The Write” published in 2012 is a collection of different poetry writing styles. “The Write” proves that Michael W. Bonds aka Warrior is not only a performance Spokenword Artist, he is also a student of the art of poetry. He has an Associate’s degree in Criminal Justice from Bauder College Kaplan University and he is a trained Cognitive Behavioral Therapist and Prison Industrial Complex Awareness workshop facilitator. After serving 10 consecutive years in Massachusetts Correctional Institutions he was freed 1999. He has committed his speech to these streets. For 17 years now he has stayed committed spitting truth to power. The Warrior has dedicated his life to using his gift to gab for growth development empowerment movement and change. He is truly an art Actionist.